Crowdsourcing the Terror Response to Mumbai

The disheartening events in Mumbai have saddened me. Most people, whether they align with India on substantiative issues, would agree that terror is not an acceptable route to meeting one's objectives. While this mayhem went on and I tried to keep track, the most upto-date information came from neither CNN nor New York Times - two of my favorite news sources - but from crowdsourcing. 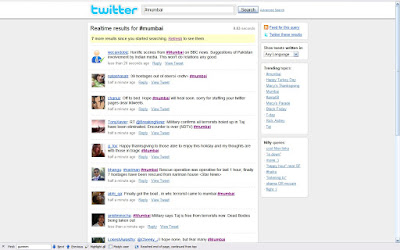 (Twitter.com keyword search #mumbai)
Twitter provided and is providing streaming first-hand accounts, information on which news networks (NDTV.com) are providing best coverage, information on death and destruction, call for blood to help victims at specific hospitals. Its, literally, been a lifesaver. 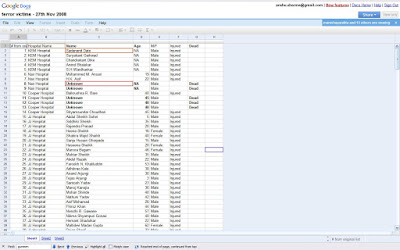 The role of media must evolve from point-to-point journalism where one reporter reports, to making sense of several distributed sources, validating them after-the-fact, editorializing the content and providing a centralized "dashboard" that combines information from these various sources.

Finally, as Om Malik said on his blog - "The shock is so extreme that I am incapable of anger." Hope the season of peace and happiness brings no further violence.

It is important to understand the stakes and strategies defining the current Indo-Pak confrontation. The two rivals have gone beyond the stage of negotiation, and are testing each others resolve. The next step may be a preemptive strike by one against the other, and from there-- war.

What is interesting is that the crisis was precipitated not by either, but by non-state actors-- "zombie" free agents that Pakistan outsources its secular policies (weaken neighbors) to.

We (the collective W.E.) is now mopping up behind this "rakta-bindu" monster created by the ISI.

That will take a strong central government-- not one percieved as a puppet of India or the US.

So, can CrowdSourcing be a tool for creating the groundswell of indigineous Pakistani public opinion that it will take to turn the Pakistani mothership around? Can these "distributed" engines be harnessed as "self organizing swarms"? Can we social-engineer sanity? I do not understand the dynamics of Twitter, nor the possibilities of Crowdsourcing. I do believe, however, that the contagon of reason can be leveraged to win this war on civilization.