Satyam’s CEO has written a mea culpa letter to the regulatory authorities indicating a fraud of epic proportions that included inflated cash balance, fake earnings and more. He said, the scheme reached “simply unmanageable proportions” and he was left in a position “like riding a tiger, not knowing how to get off without being eaten.” CNBC referred to it as the “Indian Enron” on air today. 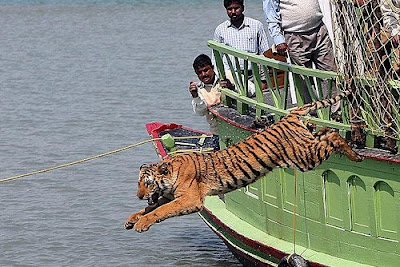 The Tiger Got Away
by zeeshan Nasir (creative commons)

This will cast a long shadow on not just Indian IT companies but on all Indian companies, and perhaps other emerging market companies in general.

The sad reality is that this company is not alone. I suspect worse frauds by other Indian companies in the “Tier-2” category. Even Tier 1 companies like Reliance, DLF and Unitech appear to have used tricks to inflate assets. By way of example, a lot of companies in India bought land in villages (at very low prices) and as real estate value went up, they showed value of “land banks” as assets on their books. Reliance, the largest Indian company, earlier last year had an IPO for Reliance Power – a company with virtually no assets but plans to build several power plants. The Reliance Power IPO was a classic dot-com era style offering – there was very little there except a shell company with ambitions.

Expect to see more of this from India, and perhaps other places.

But all is not lost. On the positive side:

Finally, it was my fear of bubbles and inflated balance sheets that made me write this post on Indian Bubble – my most popular post ever. The myth of a billion consumers waiting to buy condos and mobile phones can be laid to rest for now. India is a huge economy for many opportunities but it has not repealed the laws of gravity – everything that goes up too fast must come down.

What would Warren Buffett do?

All these scandals from Enron to Madoff to Satyam are making us investors feel like we live in Alice’s Wonderland where its hard to trust anything.

So, what would Buffett do? One can only learn from his writings and interviews. It seems like his method of relying on people and signing multi-billion dollar deals based on relationships, family history, etc. is a far more trustworthy system than relying on a gaggle of for-profit, near-term oriented auditors, advisors and all.

And from an investor perspective – the misalignment between shareholders and management keeps getting wider. I have often said that I prefer founder-owned and run companies because I trust them to do what’s best for the long-term interest of the business. With Raju and Satyam, I have to question that assertion – it seems owner-manager-founder can also sink ships – although as he claims (and yet to be proven) he made little money from this as he hasn’t sold his stake – in his letter he claims he has not sold any Satyam stock over several years.

What do you think? I am curious.

All views expressed here are personal opinions. As with all my posts, please read my disclaimer at the bottom of the page.